Every so often, a recipe teaches me one of those helpful little kitchen lessons, like “garlic burns in like 5 seconds if you’re not careful” or “chopping veggies with the knife pointing toward you is a good way to lose a finger”.

So what did we learn today? That unsweetened chocolate is NOT the same as bittersweet chocolate. At all. 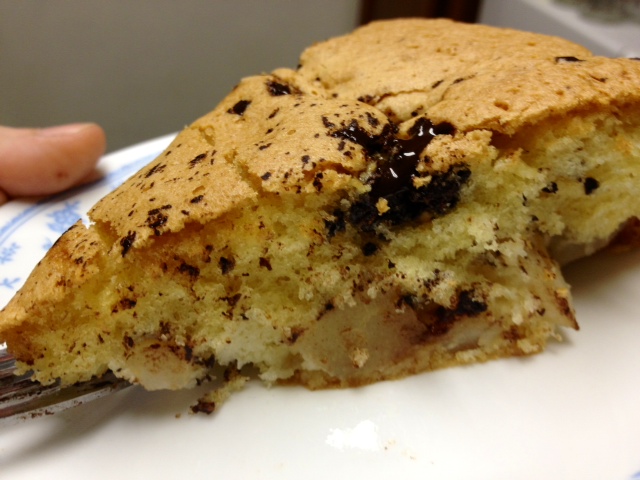 The recipe called for bittersweet chocolate, and I had to choose from between semisweet and unsweetened. I chose wrong. It definitely made this cake not quite sweet enough. I found a solution (drizzled Irish honey on top), but lesson learned!  (Also…why did I not Google this???) 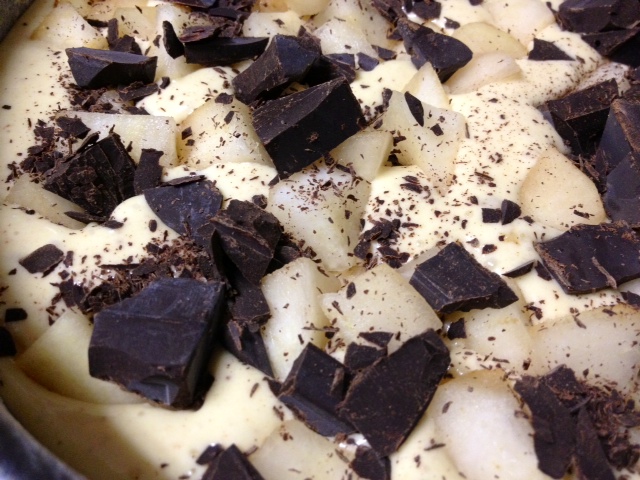 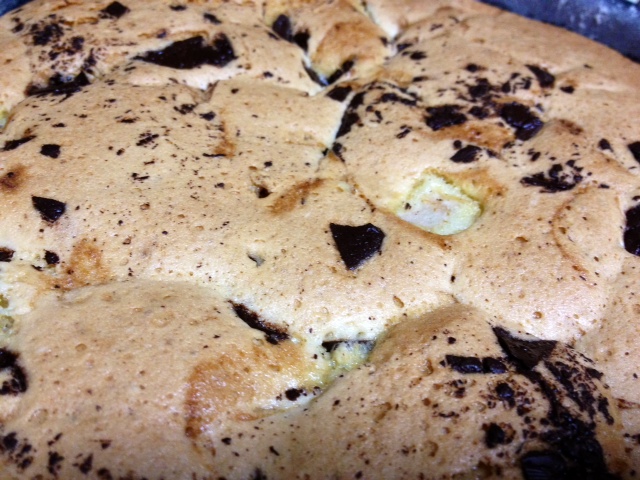 And let’s hear it for browned butter—what a revelation! I’d never cooked or baked with it before, and it added a whole other flavor dimension to this bittersweet chocolate & pear cake. Warm, nutty, rich. Totally great, I will definitely be incorporating it into other recipes.  If you haven’t made it before, here’s a “how to brown butter 101“, with detailed steps and photos.

So let’s get started. First, preheat the oven to 350 F. Then prepare the pan so it doesn’t stick. Soften or partially melt some butter, and with a pastry brush paint the interior of the pan. Then pour a little flour into the pan and rotate and gently pat to get the flour coating the entire pan. 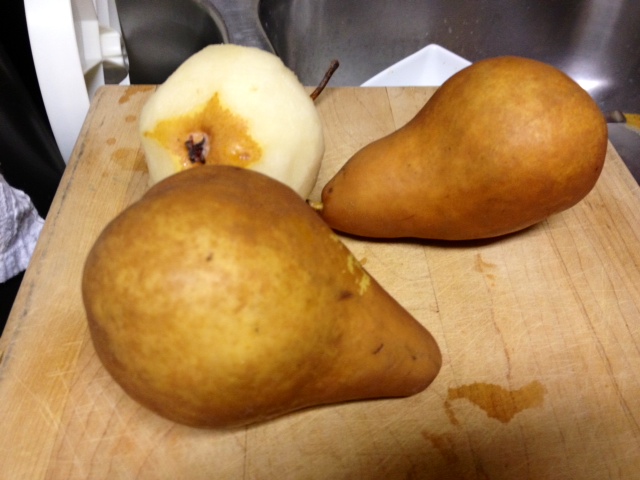 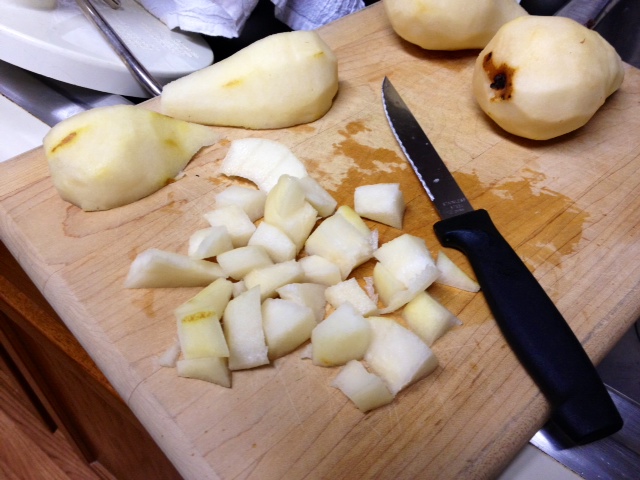 Peel and core the pears. I found it was easiest to peel them, then quarter them and cut out only the toughest part of the core—mostly it was fairly soft. 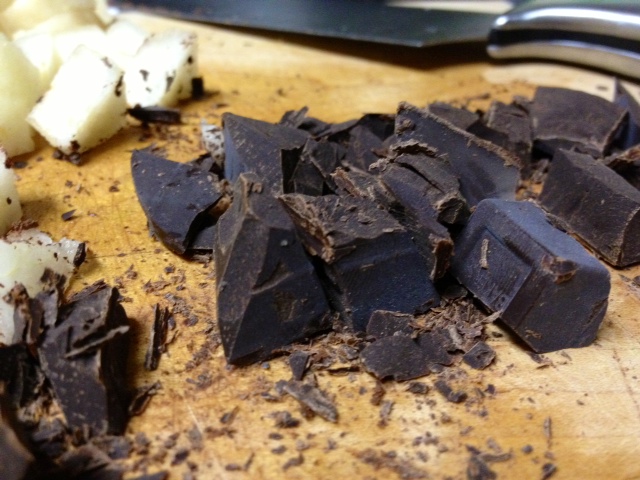 Chop up the chocolate into little pieces. They don’t need to be even, just roughly chop them. This is always really hard for me, but I used a really big knife and also nuked the chocolate in the microwave for like 10 or 15 seconds (just enough to slightly soften it but not melt it at all). 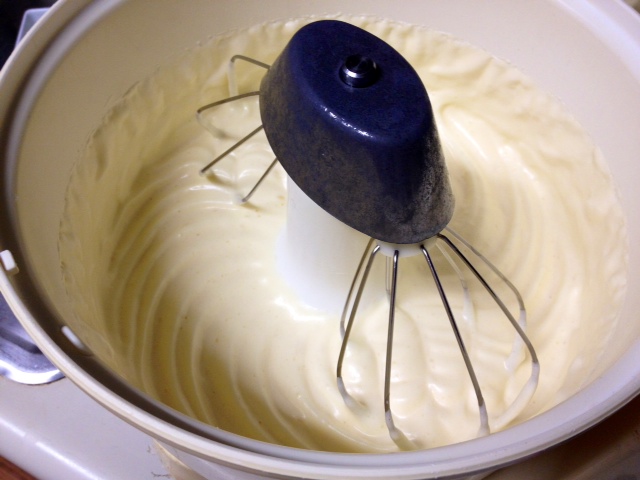 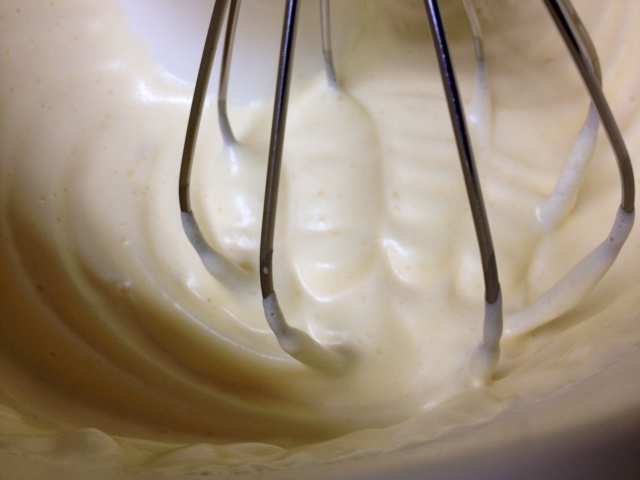 Using your mixer with the whisk attachment, whip the eggs on high until they become pale and very thick (this took 8-10 minutes in my mixer). The texture and color it gets is awesome. 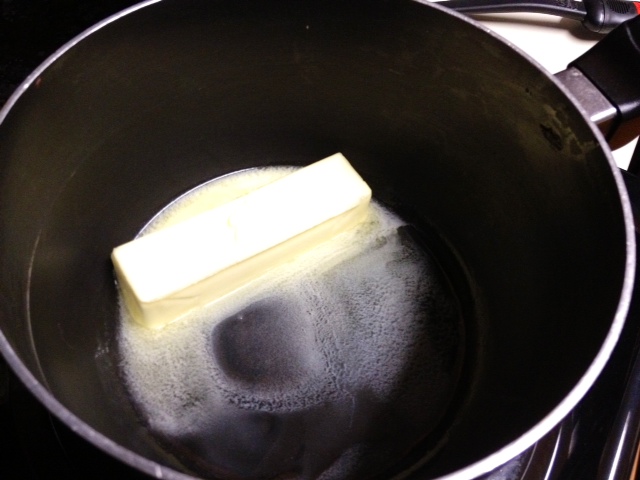 While the eggs are whipping, brown the butter. Put a small or medium saucepan on medium or medium-low (4-5 on my stove), and melt the butter until it browns and smells nutty (about 6 to 8 minutes). Make sure to stir it regularly and every so often scrape the solids off the bottom of the pan (mostly in the last couple minutes). This makes sure it browns evenly, you definitely don’t want to burn it. Remove from the burner and set aside. 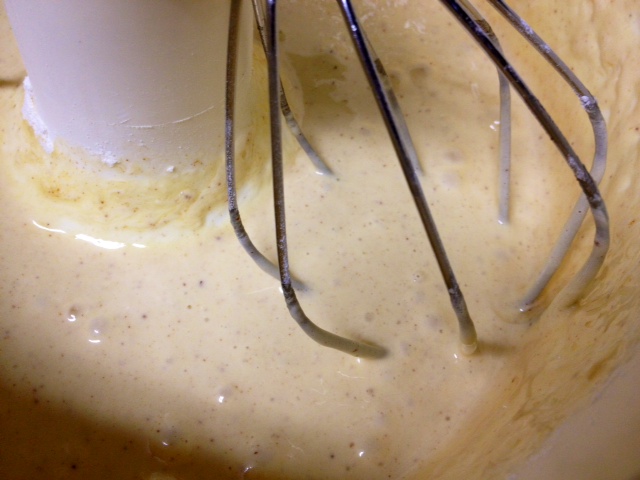 Once your eggs have reached that amazing glossiness, add the sugar and whip a few minutes more. Just as the volume of the mixture is starting to decrease, turn the mixture down to low and add the flour, baking powder, salt, and brown butter. It helps to alternate between the dry ingredients and the brown butter when adding it.

Whisk until it’s just barely combined—no more than a minute from when the flour is added. It’s important not to over-stir or it will lose its volume. 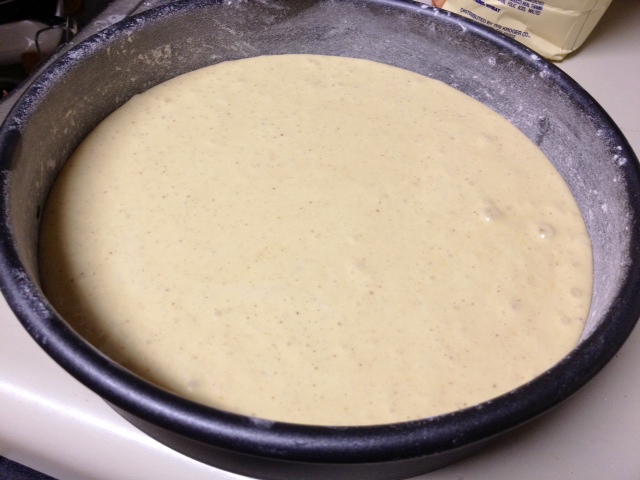 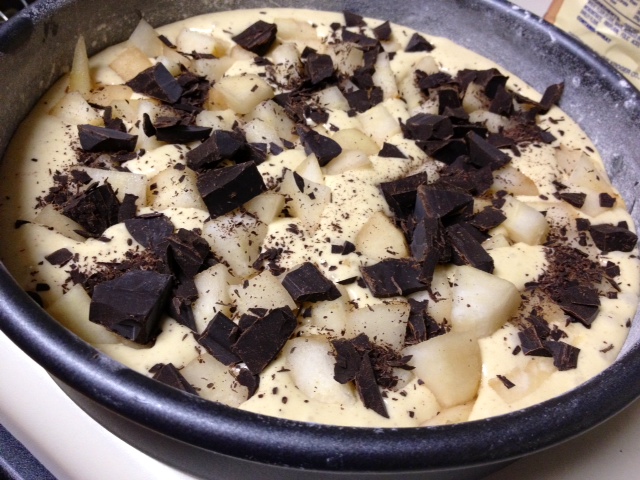 Pour into the prepared pan and then sprinkle the pears and chocolate on top. Don’t worry about them being on top, the batter will expand as it cooks and envelop the fruit and chocolate. 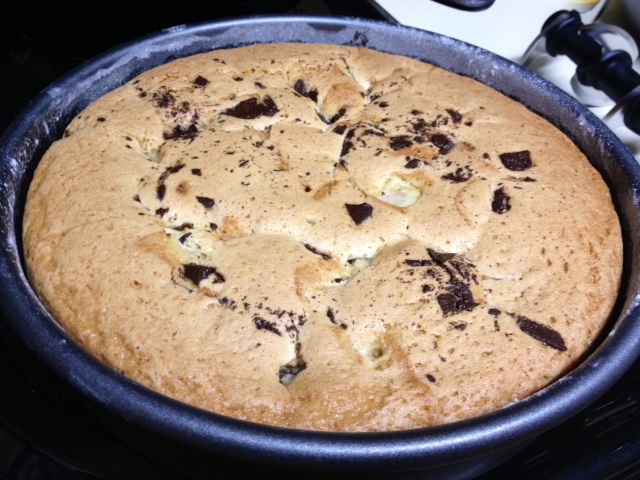 Bake the cake until it’s golden brown and springs back to the touch. Use 40-50 minutes as a guideline, but it’s most important to make sure the cake is done vs. specific baking time. A toothpick should come out clean. 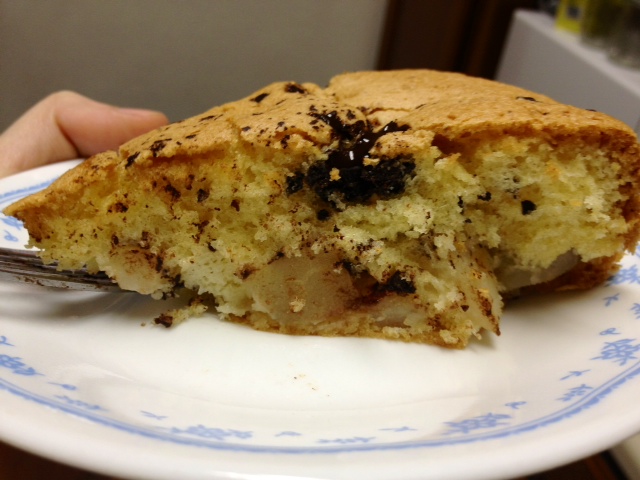 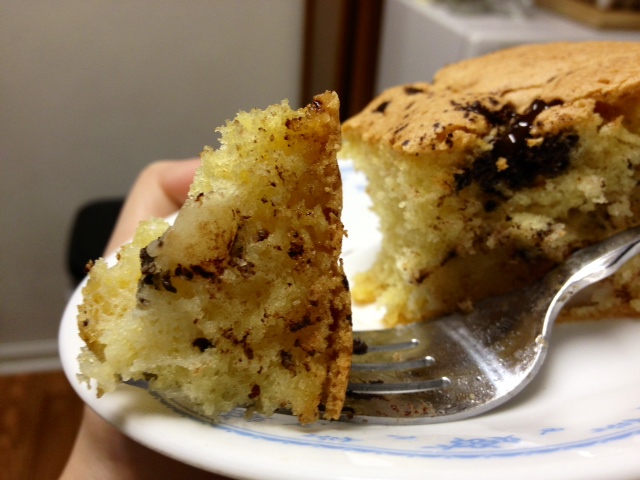 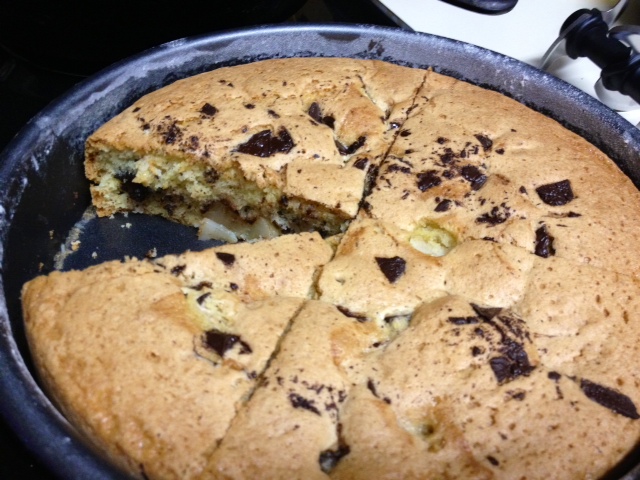 This cake was so delightful! Pears are my favorite fruit, and the cake overall was lightly sweet and just perfect for having with my coffee in the morning or after dinner at night. 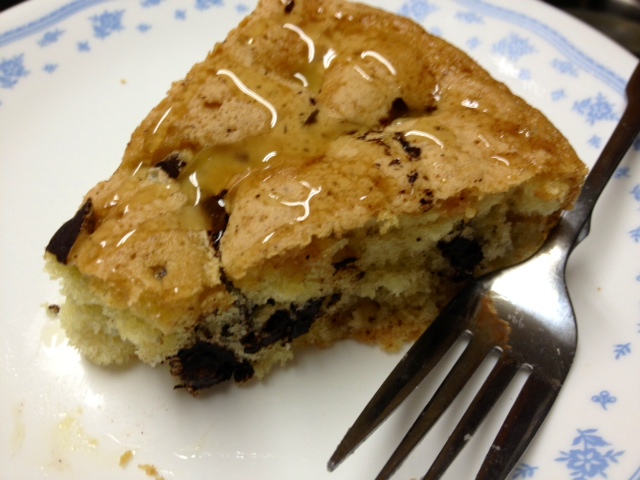 As I said, I had to add a little honey to make up for the unsweetened chocolate, but it was delicious and added a nice texture too. I’ll definitely be making this chocolate & pear cake again!

Preheat the oven to 350°F. Butter a 9-inch springform pan (I just used a regular 9-inch round layer cake pan) and dust with flour or breadcrumbs, set aside. Sift the flour, baking powder and salt together, set aside. Peel and dice pears, and chop chocolate so that it’s all ready to go when you need it.

Using a mixer fitted with the whisk attachment, whip the eggs on high speed until pale and very thick (this took 8-10 minutes in my stand mixer). While the eggs are whipping, brown the butter. Melt the butter in a medium saucepan on medium (about 4-5 on my stove) and cook it until the butter browns and smells nutty (about 6 to 8 minutes). Stir regularly and scrape the solids off the bottom of the pan in the last couple minutes to ensure even browning and make sure you don’t burn it. Remove from the flame but keep in a warm spot.

Add the sugar to the eggs and whip a few minutes more. Just as the volume of the egg-sugar mixture is starting to decrase, turn the mixture down to stir, and add the flour mixture and brown butter, alternating portions of the two. Whisk until just barely combined—no more than a minute from when the flour is first added—and then use a spatula to gently fold the batter until the ingredients are combined. It’s very important not to over-whisk or fold the batter or it will lose volume.

Pour into the prepared pan. Sprinkle the pear and chocolate chunks over the top, and bake until the cake is golden brown and springs back to the touch, about 40 to 50 minutes (around 50 for me), or a tester comes out clean. Make sure you pay attention to whether the cake is done vs. baking time, it definitely needs to be done.

Serve as desired. Smitten Kitchen recommends whipped cream with a drop of almond extract in it (which sounds delicious!) or buttermilk ice cream.  I didn’t have any of these and ate plain except for a drizzle of honey from Ireland (due to the aforementioned unsweetened chocolate confusion). 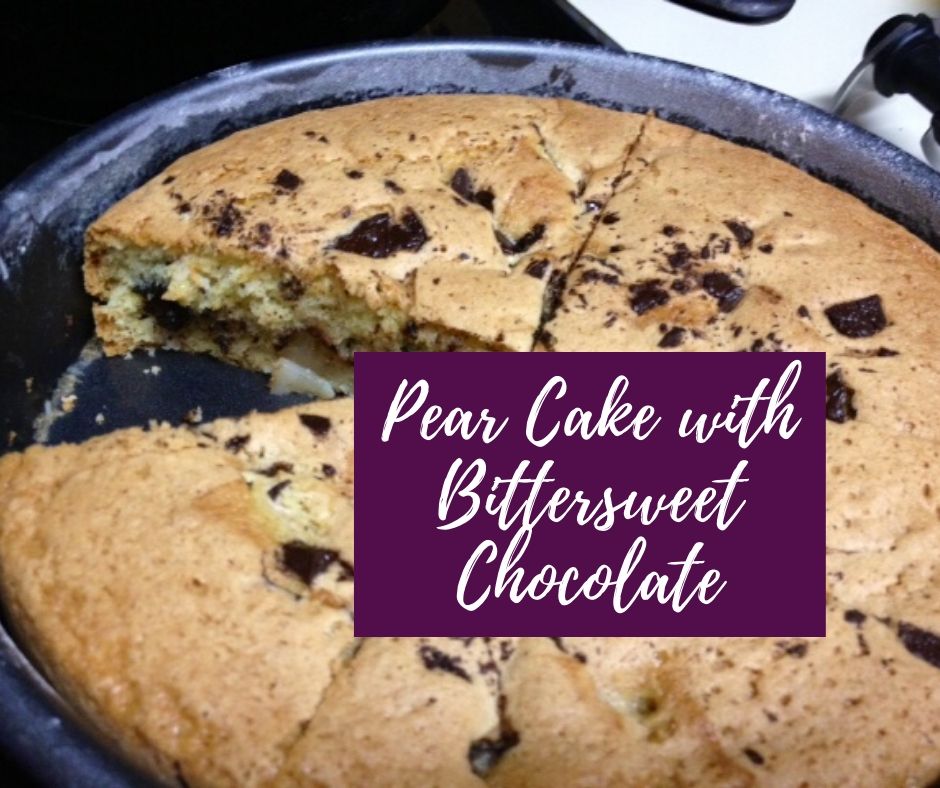 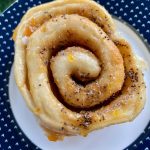