You may have noticed that I have far fewer vegetable side dish recipes on this site than any other type of recipe. I don’t know why, honestly. I like veggies. Really, I do.

But it seems like when I’m browsing through Pinterest, most of the veggie sides I see are either a) complicated and time consuming, b) really unhealthy, or c) terrible sounding. A lot of the time when I’m making a meal, I focus on either the main dish or the dessert, and sauté up some kale or brussels sprouts and call it a day. Or I’ll make a main dish where the veggies are already included. 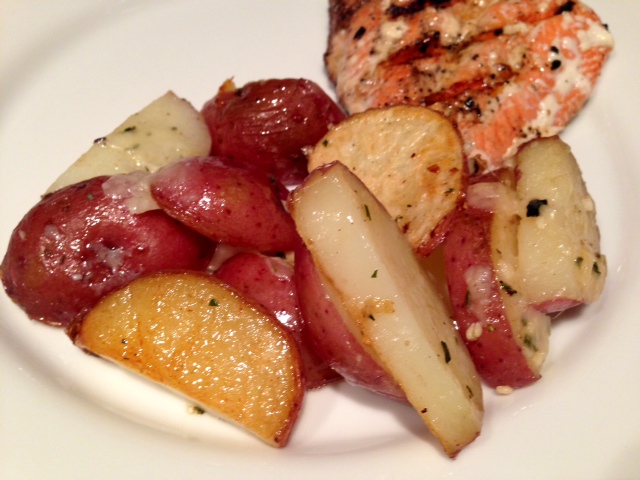 What you may especially notice if you browse through my Veggies and Sides section is that there are almost no potato dishes. Two in the past year and a half, to be exact. It’s not my go-to vegetable on account of all the starchiness and carb-iness with fewer of the health benefits that my green veggie friends have. I grew up eating a lot of potatoes, but it’s just not where I gravitate. 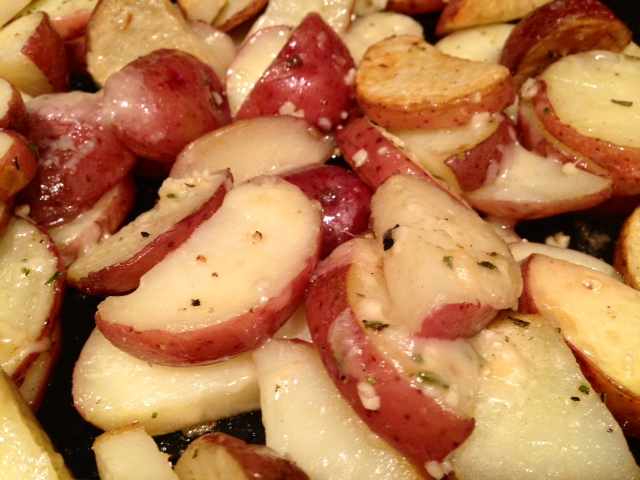 But I do love them when they’re done well. And these parmesan garlic roasted potatoes are. They’re also super easy.

One of the things I often dislike about a lot of potato dishes is the multiple steps they require—chopping, boiling, then frying or mashing. As we’ve already established, I’m lazy. But the steps were pretty quick for this recipe, and I was able to throw together a fast, delicious side to go with some awesome grilled salmon. 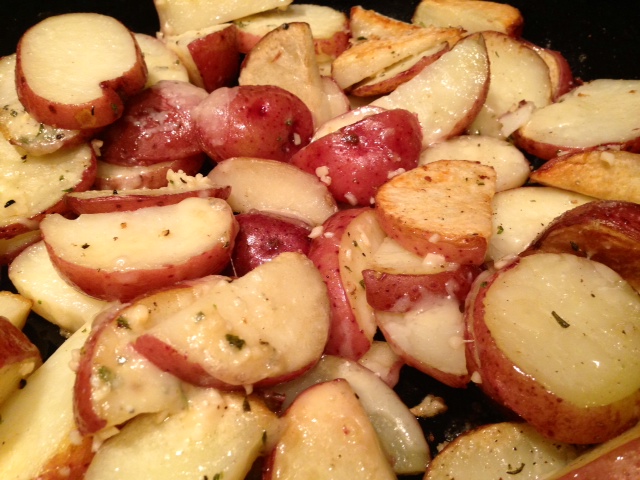 The original recipe actually calls for fresh parsley, which I didn’t have on-hand. I swapped in fresh rosemary instead, which was perfect with the potatoes. The parmesan made such a tasty, golden crust on them that I can see making these over and over. They were even good as leftovers a few days later!

Preheat oven to 450°F and bring a pot of water to boil. Cut potatoes into cubes or wedges. 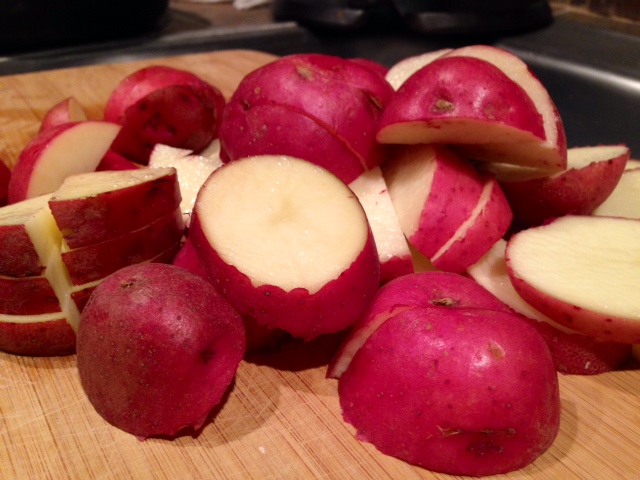 Add the potatoes to the boiling water along with a hefty shake of salt (at least a few tablespoons). Cook for 3 to 6 minutes, depending on how big your potato pieces are.

While potatoes are cooking, put the oil in cast iron skillet or other heavy, oven-safe pan and stick it in the oven to heat. 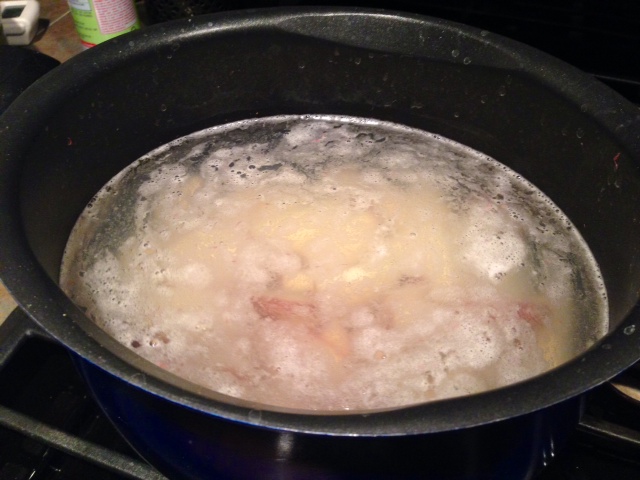 When the potatoes are mostly tender, drain them and keep them in the pot. Put them back on the burner and shake (with the lid still on, if possible) to dry the potatoes and to rough them up a little. Roughing up their surfaces is what gives them that perfect crispiness when you roast them. 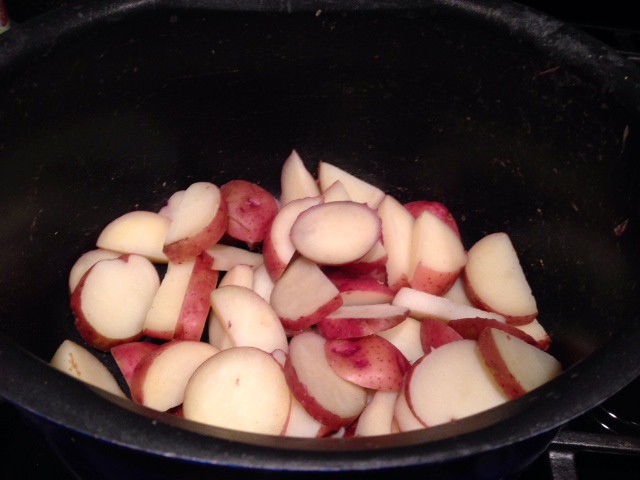 Pull that hot pan out and add the potatoes, tossing to coat them with the hot oil. Roast for several minutes, turning once or twice.

Chop up your herbs—I used fresh rosemary since it’s the only thing I’ve managed not to kill. 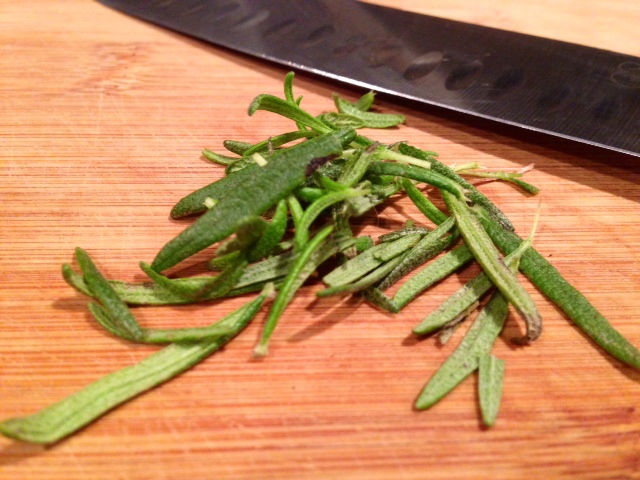 When the potatoes are almost tender, sprinkle with fresh garlic, parmesan, the chopped rosemary, salt and pepper and continue roasting until they’re tender and crisping. Turn at least one more time for even browning. 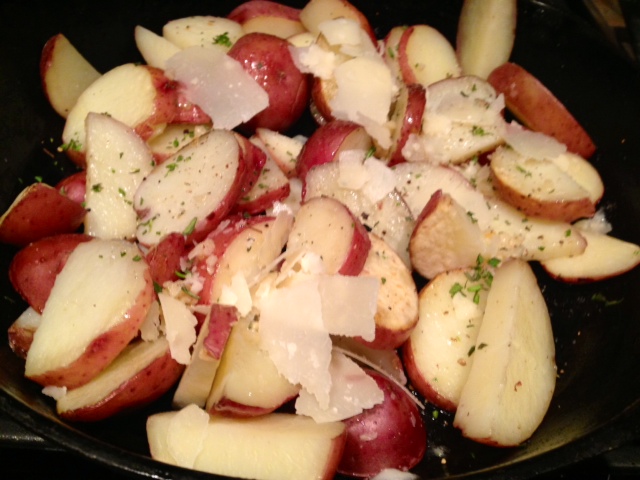 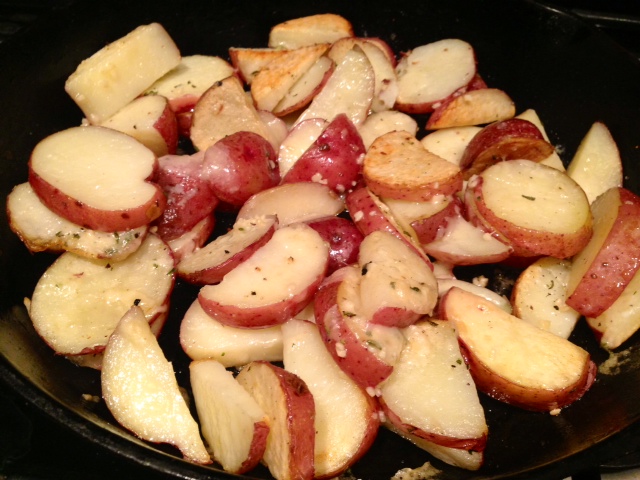 When they’re crispy and awesome, remove from the oven. I would have probably done these a couple more minutes but we were hungry and the salmon was done, so we rolled with it. And now you have a healthy, easy side dish that complements just about anything.

Other starchy side dishes you’ll love: 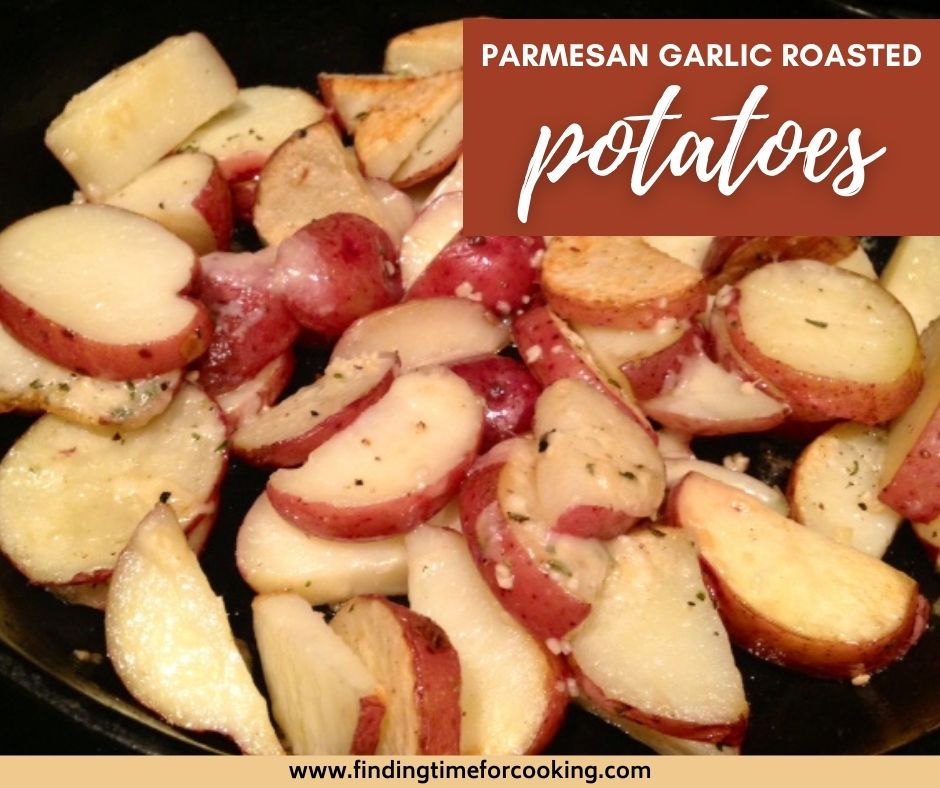 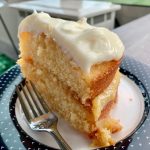 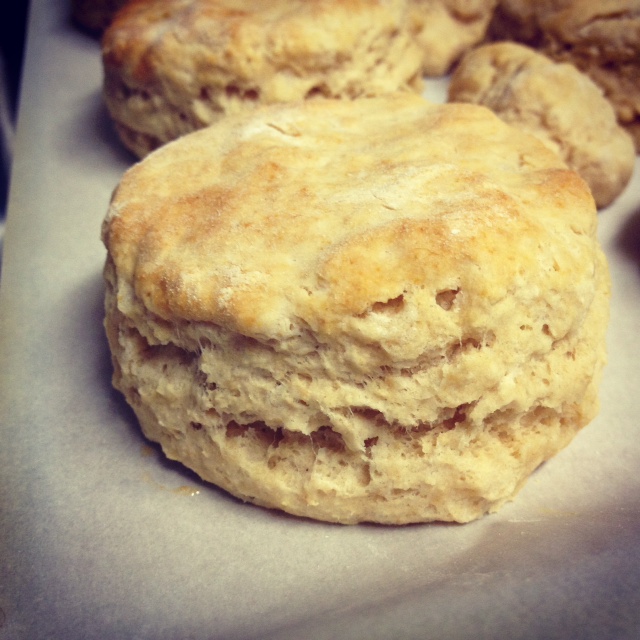