This Thanksgiving has reminded me how much we always default to the same veggie and side dishes. And quite frankly, they’re delicious but not all that healthy. As always, we had an embarrassment of food riches this Thanksgiving, everything from green bean casserole to scalloped potatoes to sweet potato casserole. So I was ready for something different, and healthier.  When I discovered this brussels sprouts and cauliflower gratin on A Cozy Kitchen, I decided it had to happen.

This dish has a great, creamy cheese sauce that’s not really fatty or heavy, and the Gruyere has a nice nutty flavor to it. The brussels sprouts and the cauliflower play nicely off each other texture-wise, and are full of vitamins and antioxidants and fiber. Overall, this is a great healthy side dish alternative. 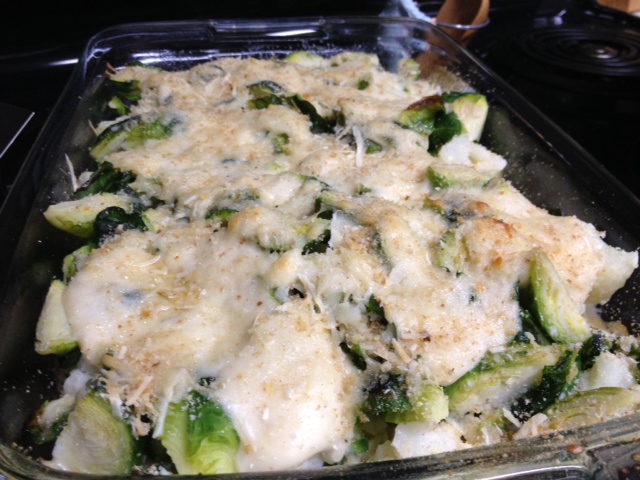 So I used all the cauliflower and made it in a 9×13, but I didn’t think to make extra sauce. If you’re using a 9×13, I’d just increase the milk and cheese amounts by a little bit to account for the extra food and pan size. 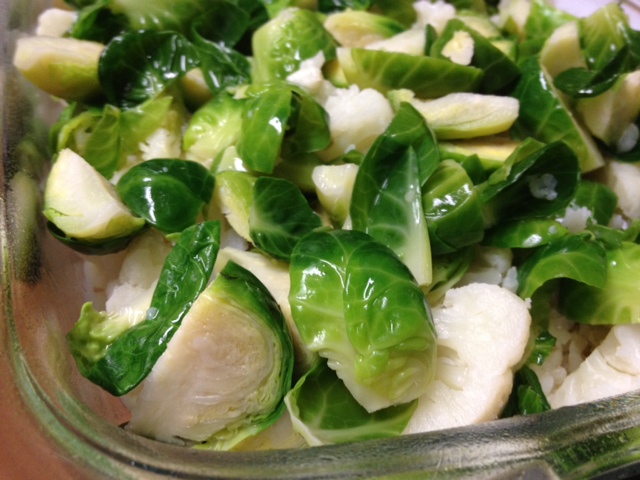 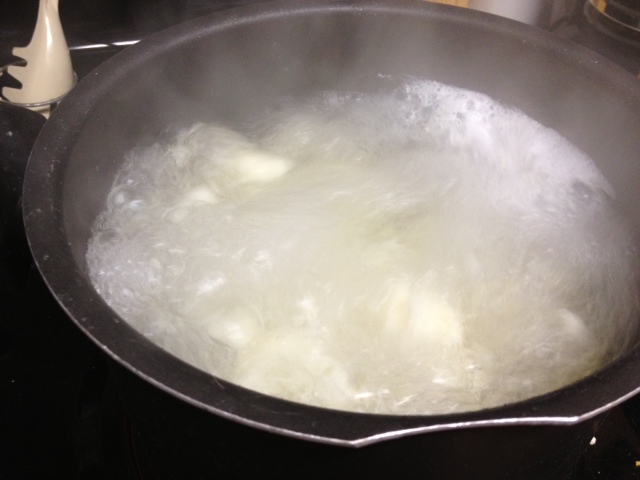 Preheat the oven to 375. Place a colander in the sink, and put ice water in a very large bowl. Bring a pot of water to boil, and cut up the cauliflower into small florets (forgot to take a picture of that part!). Boil for 5-6 minutes, then drain and place the cauliflower into the big bowl of ice water to stop the cooking process. After they’ve been in the ice water for a few minutes, drain again and set aside. 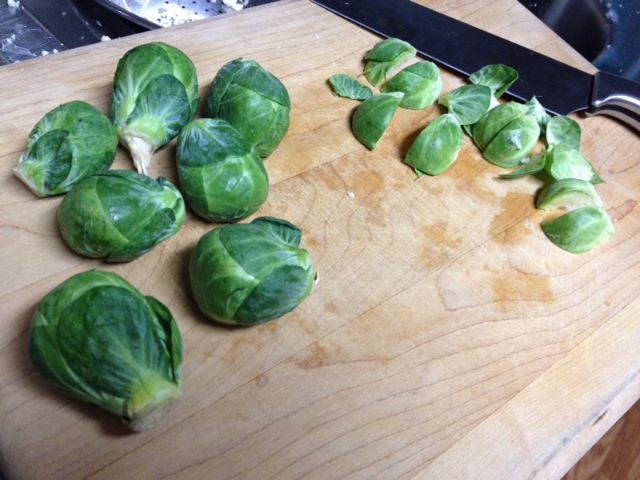 Bring the pot of water back to a boil, and quarter the brussels sprouts. Boil them for 3-4 minutes, then drain and place in the ice water. 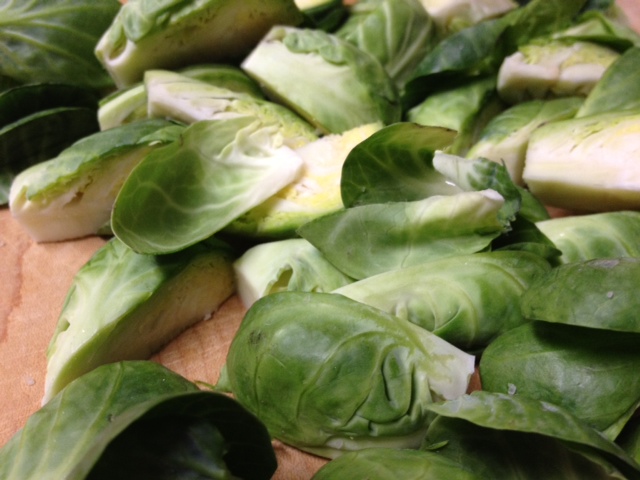 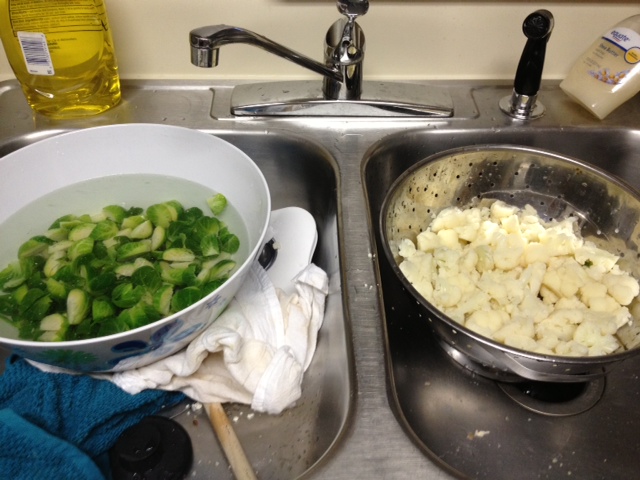 Now we’re ready for the sauce. 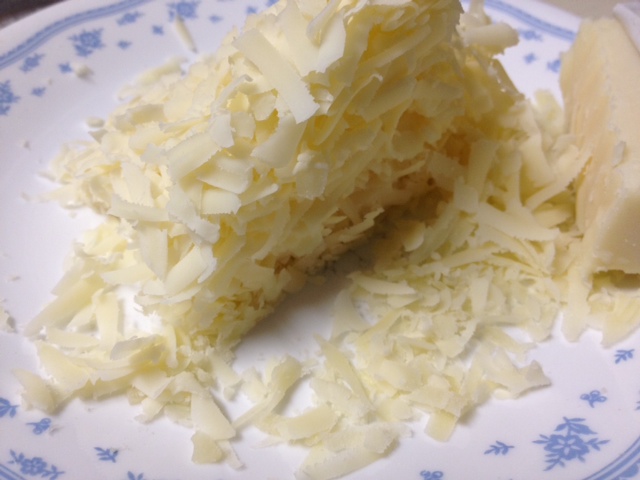 Grate the Gruyere (or whatever cheese you’re using as the base). 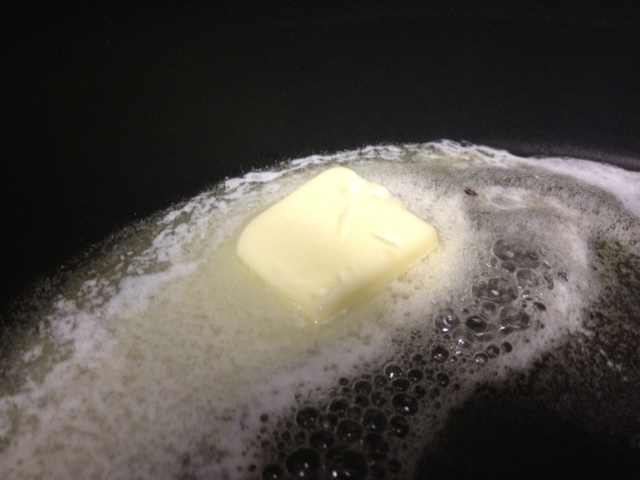 To make the roux, start by melting the butter in a big skillet or saucepan on medium (5-6 on my stove, 4-5 on my mom’s stove). 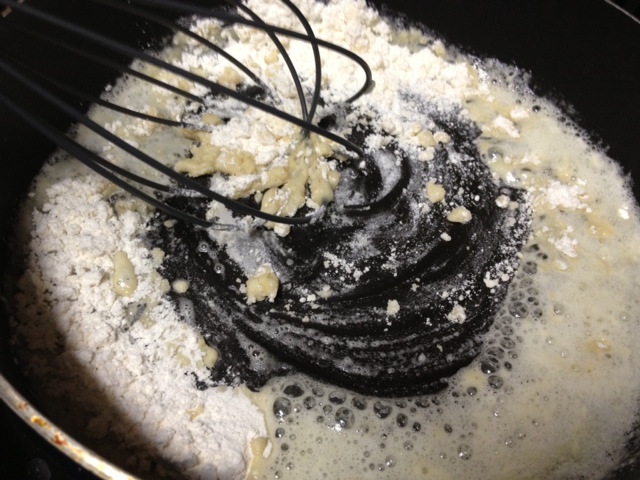 When it’s melted and sizzling, add the flour and stir or whisk quickly and constantly for about two minutes. It will be golden and bubbly. I never do mine for quite two minutes because I’m worried it will burn. 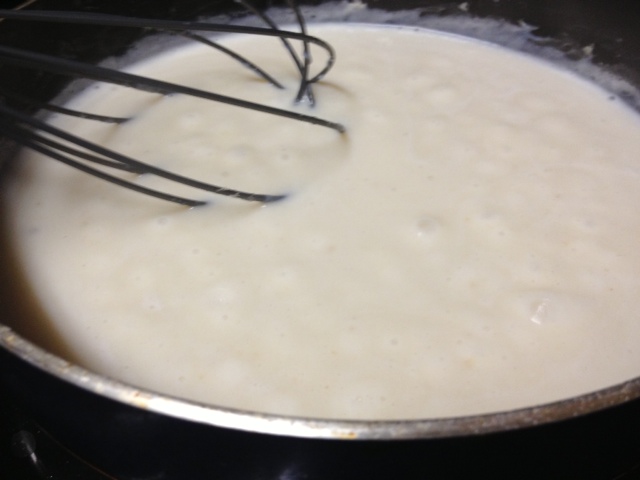 Pour the milk in a steady stream, stirring constantly. Keep stirring and bring to a boil. Let it boil (still stirring) for a minute, until it’s thickened. 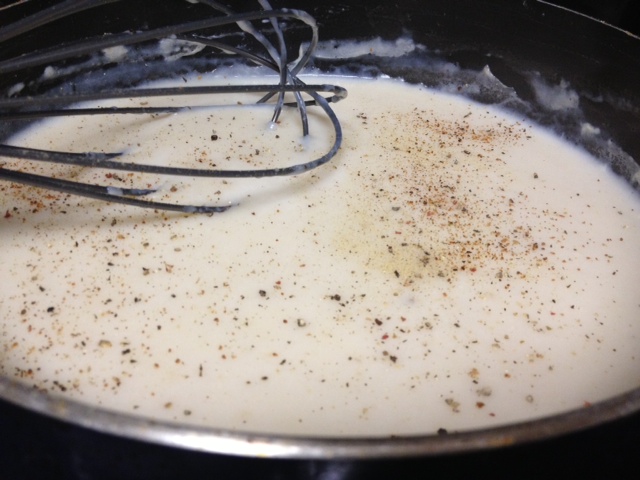 Pull it off the heat and add the salt, pepper, nutmeg. 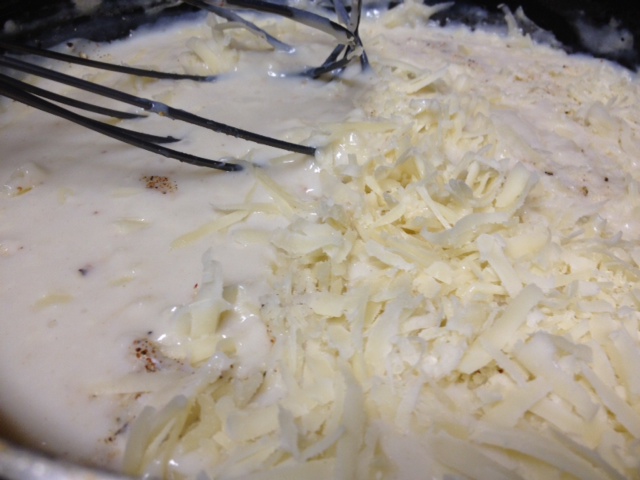 Add 1/2 cup of the Gruyere (reserving the rest for topping), and the Parmesan. Stir until it’s well combined, a nice creamy sauce. 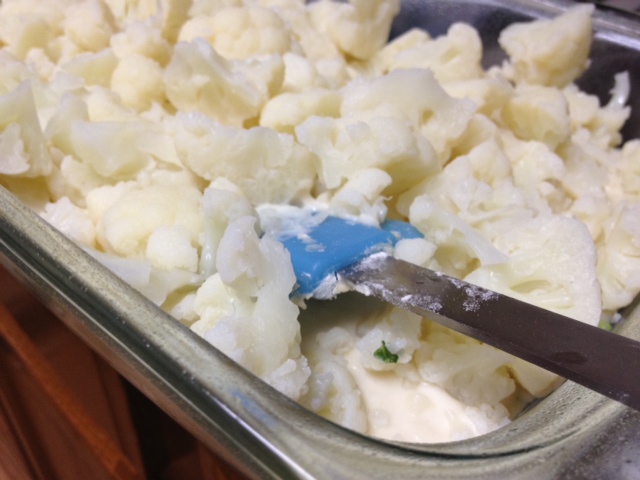 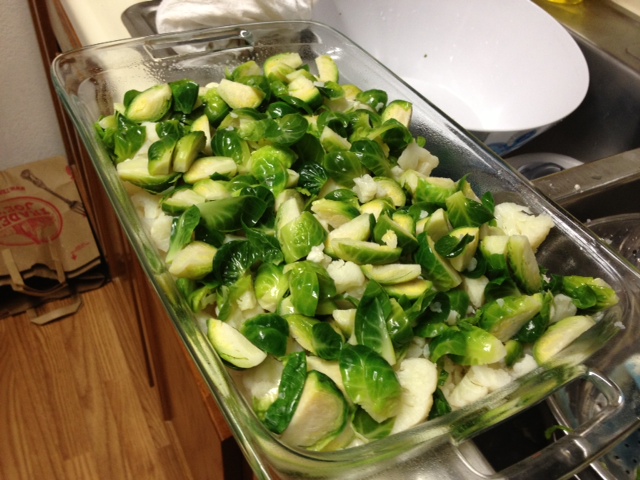 Layer the brussels sprouts on top. 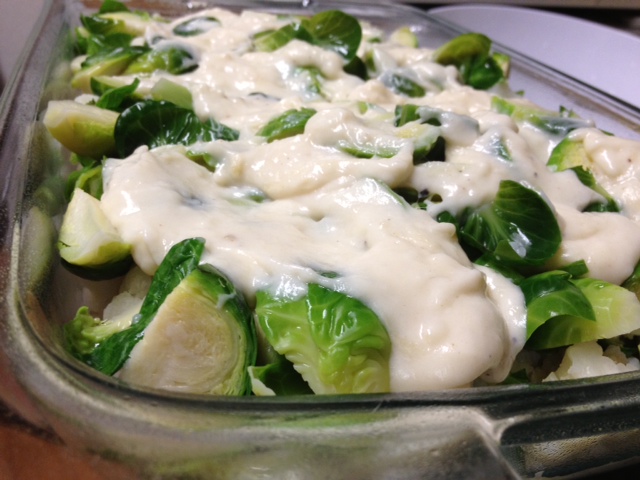 Pour the remaining sauce over the whole pan, trying to spread it out fairly evenly. 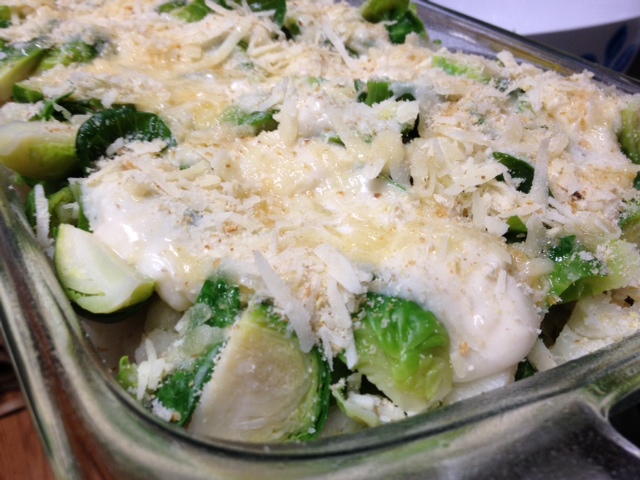 Top with the rest of the cheese and some bread crumbs and maybe some extra salt and pepper, and we’re in business. 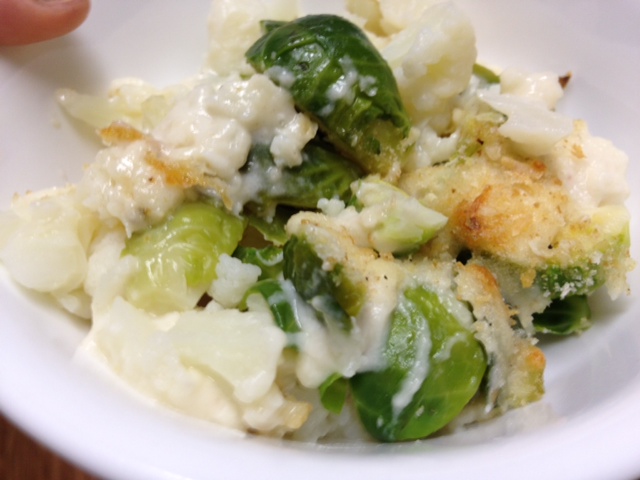 Bake for 25-35 minutes, until the top is nice and golden. Serve right away, but it also is great leftover.  I’m telling you, this brussels sprout gratin will make a believer of sprouts haters!

Other holiday side dishes you’ll love:

As noted above, if you are using a 9×13 pan and the full head of cauliflower, I’d recommend adding about 1/4 cup of milk and some extra cheese.

Preheat the oven to 375 degrees F. Prepare a large bowl filled with ice water and ice.  Cook the cauliflower florets in a large pot of boiling salted water for 5 to 6 minutes, until tender but still firm. Drain. Throw the cooked cauliflower into the bowl of ice water to stop them from cooking any further.  Bring the pot back up to a boil and put in the quartered brussels sprouts and cook for 3-4 minutes.  The cauliflower should be completely cooled.  Drain them and set aside. After the brussels sprouts are done, throw them in the bowl of ice water and ice.

Meanwhile, melt 2 tablespoons of the butter in a medium saucepan over low heat. Add the flour, stirring constantly with a wooden spoon for 2 minutes. Pour the hot milk into the butter-flour mixture and stir until it comes to a boil. Boil, whisking constantly, for 1 minute, or until thickened. Off the heat, add 1 teaspoon of salt, the pepper, nutmeg, 1/2 cup of the Gruyere, and the Parmesan.

Pour 1/3 of the sauce on the bottom of an 8 by 11 by 2-inch baking dish. Place the drained cauliflower and brussels sprouts on top and then spread the rest of the sauce evenly on top. Combine the bread crumbs with the remaining 1/4 cup of Gruyere and sprinkle on top. Melt the remaining 2 tablespoons of butter and drizzle over the gratin. Sprinkle with salt and pepper. Bake for 25 to 30 minutes, until the top is browned.

Original recipe from A Cozy Kitchen 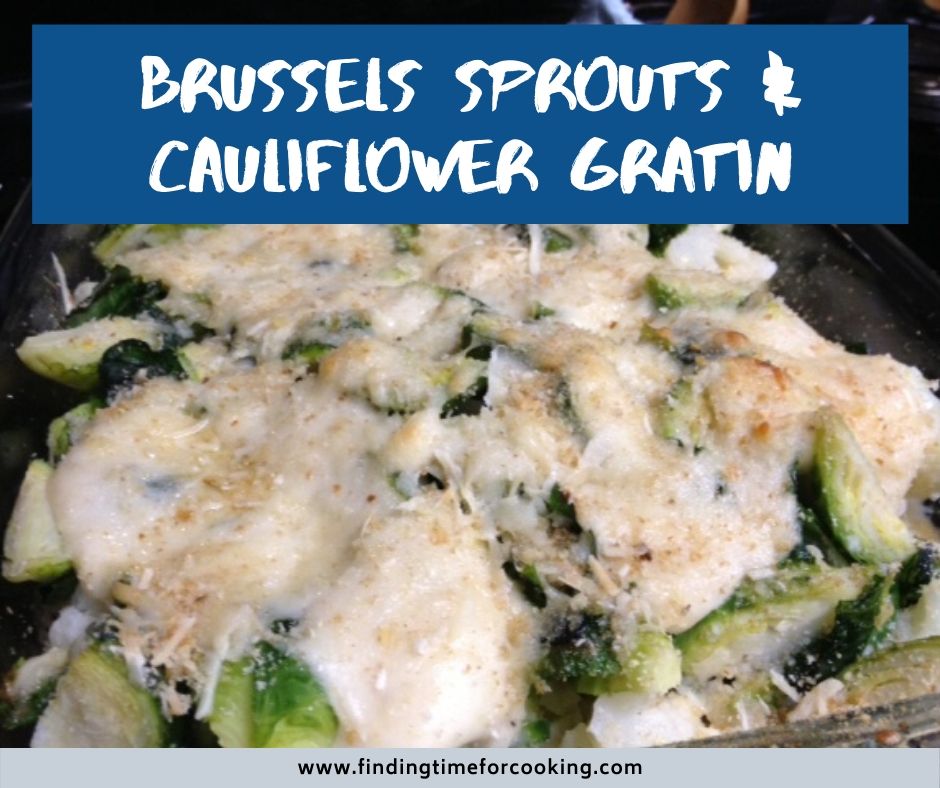