I think fall may finally be sneaking up on us here in Georgia. We’ve had a gorgeous late summer and early fall…making up for the terrible, rainy spring and summer we had. Even in mid-October we’ve had temps in the upper 70s and even 80s. I was laying out at the pool last weekend. For real. The pool was tarped over and there was only one chair left, but I was there.

Then this week it turned gray and rainy and a little chilly. 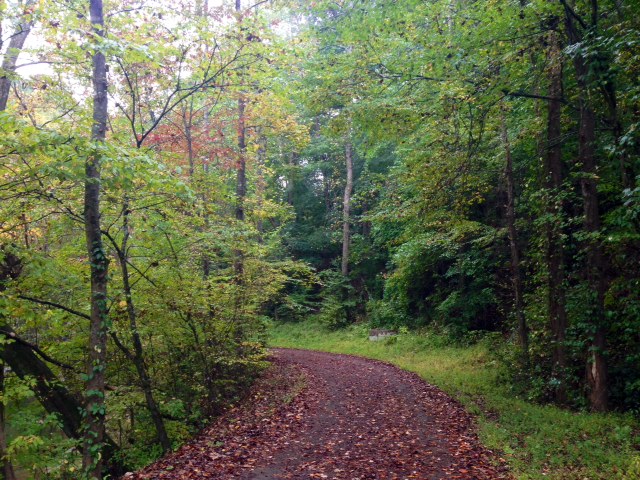 And is there a more quintessentially-fall dish than one combining apples, cinnamon, and streusel topping?? I think maybe not. 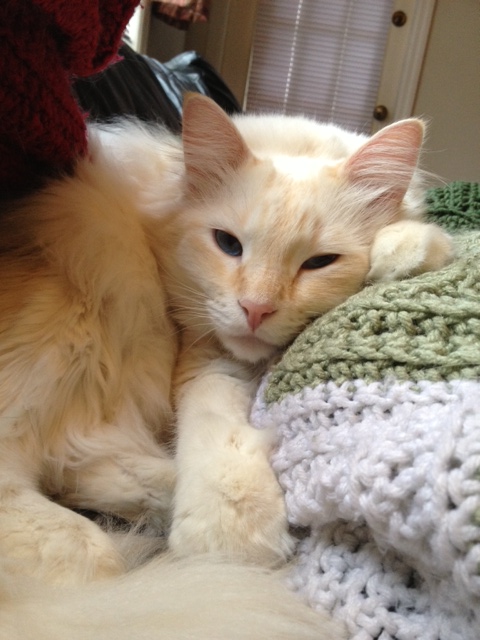 I’ll be honest—I don’t think I’ve ever tried out a traditional coffee cake recipe besides the one I grew up on (my mom’s, which is amazing). I mean, if it ain’t broke, why fix it?

So last week when it was my turn to make treats for a co-worker’s birthday, and knowing that she loves cinnamon-y things, I figured I’d whip up my mom’s coffee cake. 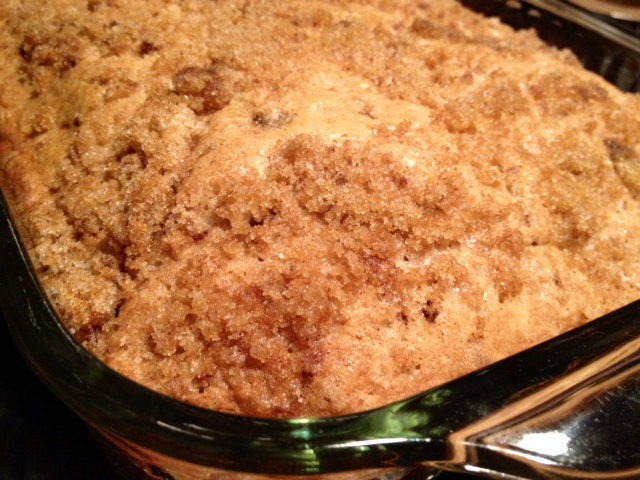 But then I was browsing Pinterest and found a recipe I’d pinned a long time ago for an apple cinnamon chip coffee cake.

“Hmm…” I thought, “Intriguing. I have all this homemade apple butter and I stocked up on cinnamon chips. Maybe this is fate.” [I typed “fat” the first time and almost left it because that seemed apropos as well] 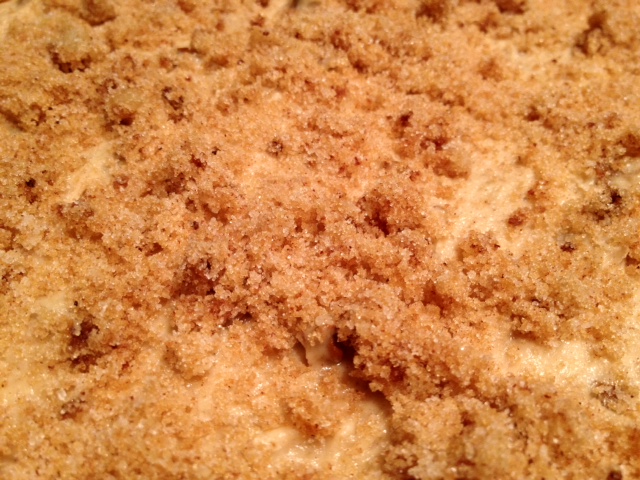 But I made a number of adjustments, such as using half a bag of cinnamon chips instead of a whole bag (which really seemed like overkill).

The biggest change I made, though, was swapping out the basic powdered sugar glaze the recipe suggested for the sweet and slightly crunchy cinnamon-sugar streusel topping that’s more traditional for coffee cakes. And it was amazing! 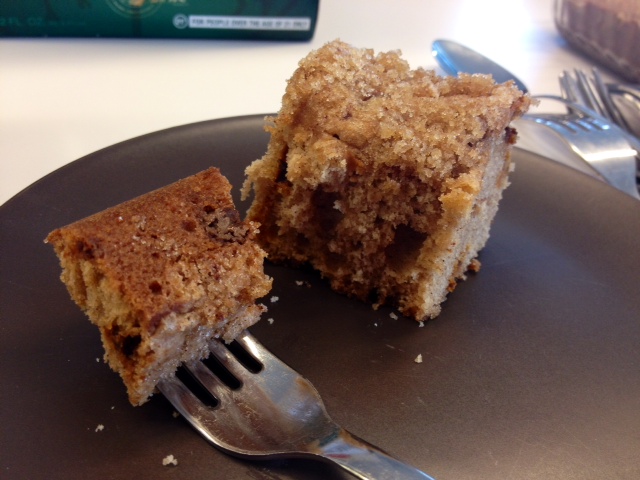 This cake was so moist, even a couple days after I made it (I had to make it Sunday and serve it Tuesday). The cinnamon chips in the cake were like tiny little gems of awesome studded throughout.

Mix your dry ingredients in a separate bowl, though it’s not the end of the world if you’re too lazy to do it. 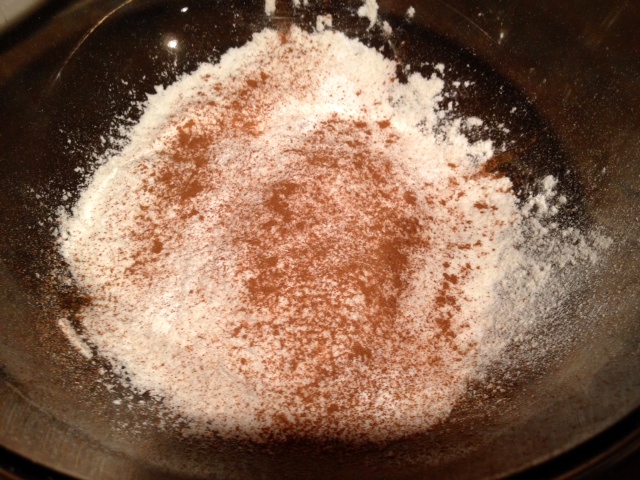 In your mixer, beat the butter and granulated sugar until fluffy—about a minute or two. 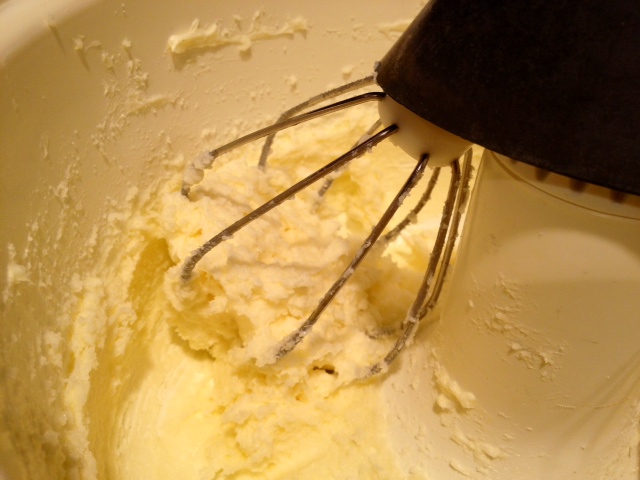 Beat in the eggs, extracts, and apple butter. 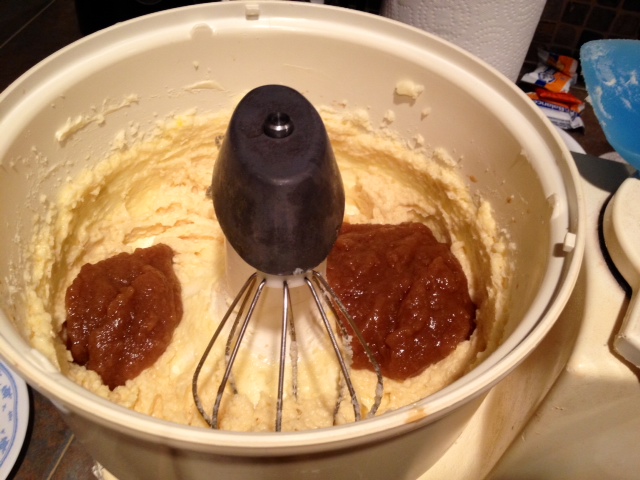 Gradually add the dry ingredients—flour, baking soda, cinnamon, and salt—beating until the batter is well-blended. 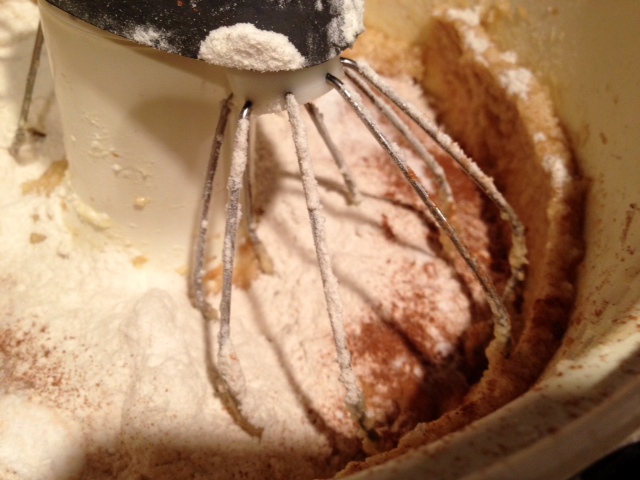 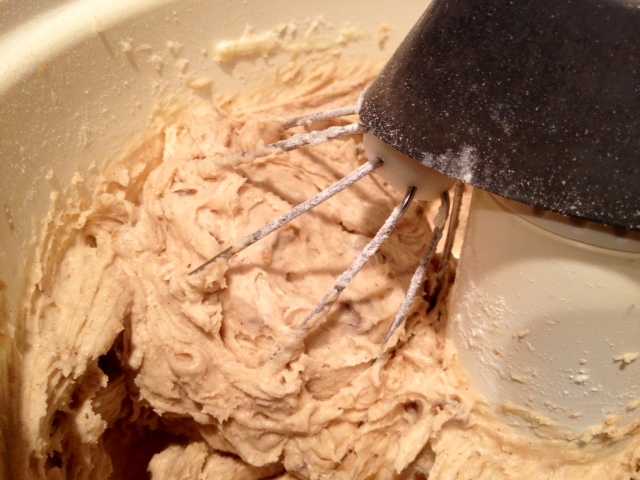 Pour in the cinnamon chips (and walnuts if you’re using them) then just barely stir with the mixer. 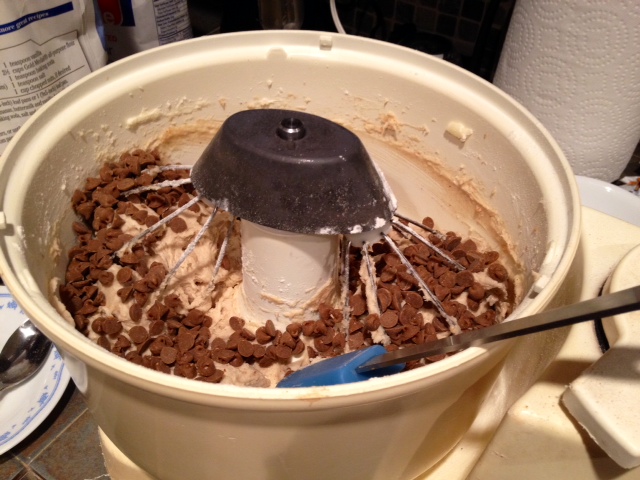 Spread in your prepared pan and kind of smooth out. 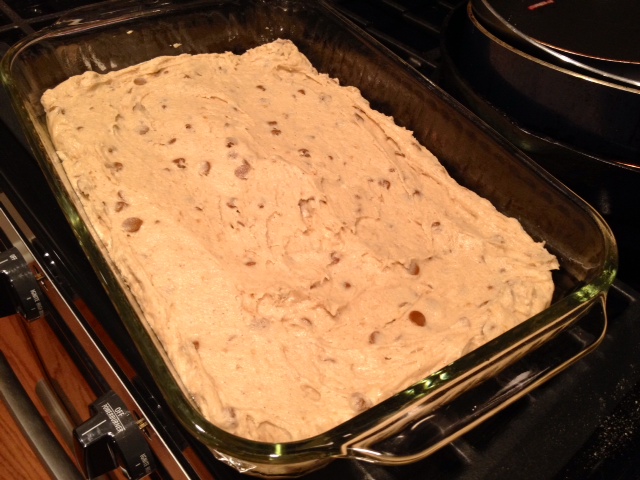 In a small bowl, stir together the topping ingredients. The original recipe called for a simple powdered sugar glaze, which would have been fine. But I decided to use the cinnamon-sugar streusel topping that tops my family’s basic coffee cake.

Not only is the flavor amazing, but it gives that little crunch on top too. I honestly could have halved the topping amount and been happy with it—that’s a lot of topping! 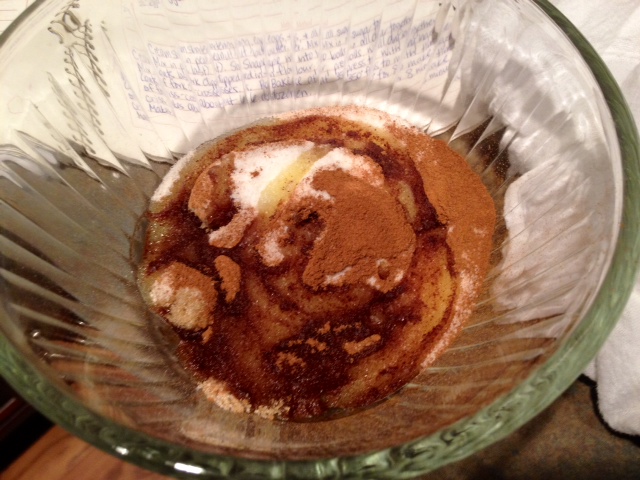 Generously sprinkle the topping over the batter and pop in the oven. 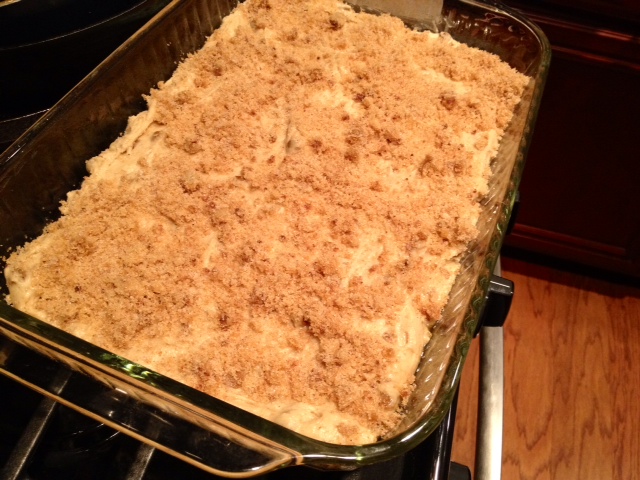 Bake the cake for 30-35 minutes for a 9×13 pan. A toothpick inserted into the middle should come out clean. 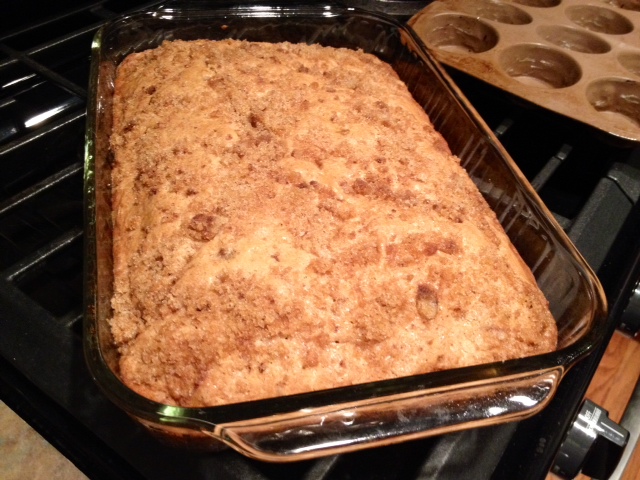 It’s like a riddle…”how do you make coffee cake even better??”  Add apple butter.  This was amazing and delicious, and you need it in your life right now.

In a large mixer bowl, beat the butter and granulated sugar together for a minute or two, until fluffy. Beat in the eggs, extracts, and apple butter. Gradually add the flour, baking soda, cinnamon, and salt, beating until the batter is well-blended. Stir in the cinnamon chips (and walnuts if you’re using) and spread in the prepared pan. Combine the topping ingredients and sprinkle generously over the batter in the pan.

Bake for 30-35 minutes (more like 45-50 minutes if you’re using the bundt cake pan), until a toothpick inserted into the center comes out clean. Cool completely in the pan on a wire rack. 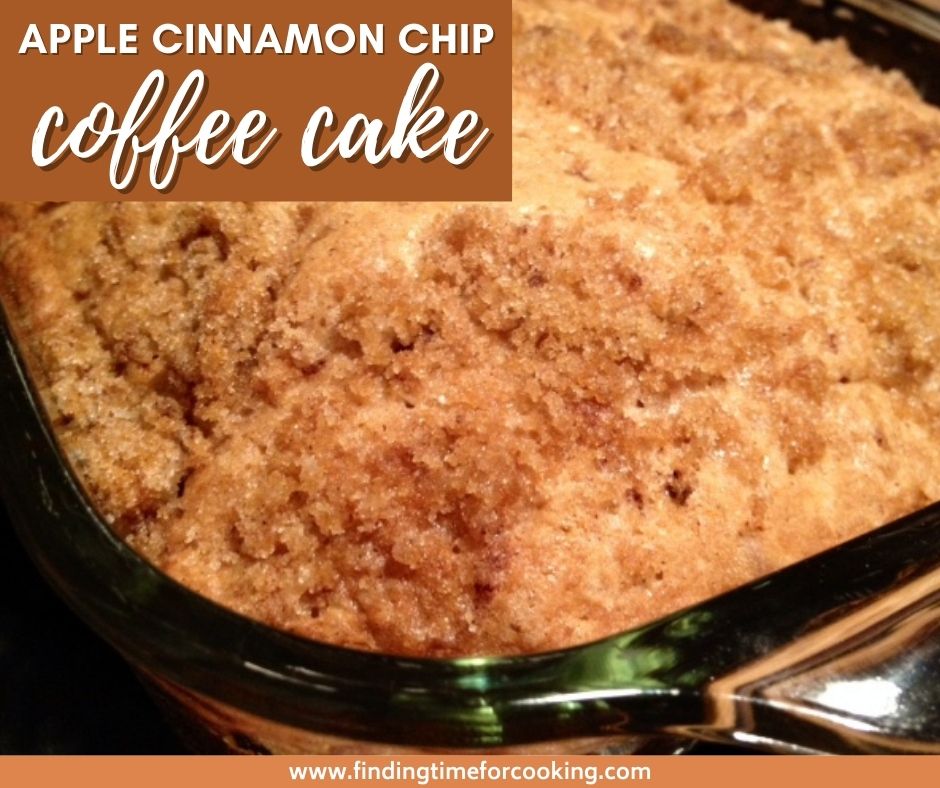 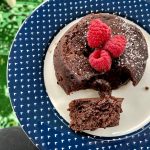