Apparently, without realizing it, I’m on a quest to find the best artisan bread recipe. I guess it’s because bread baking is so new to me, and I’m still kind of giddy about how easy it really is. So I present to you yet another option for easy homemade bread—whole wheat crusty artisan bread! 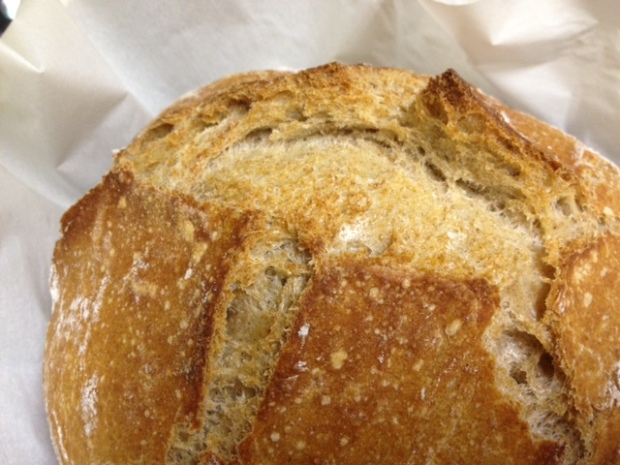 Making the bread itself is ridiculously fast and easy—literally five minutes to make the dough. The biggest thing to note here is the long rising time…12 to 18 hours. So basically you want to make up the dough at night and then bake it the next day. 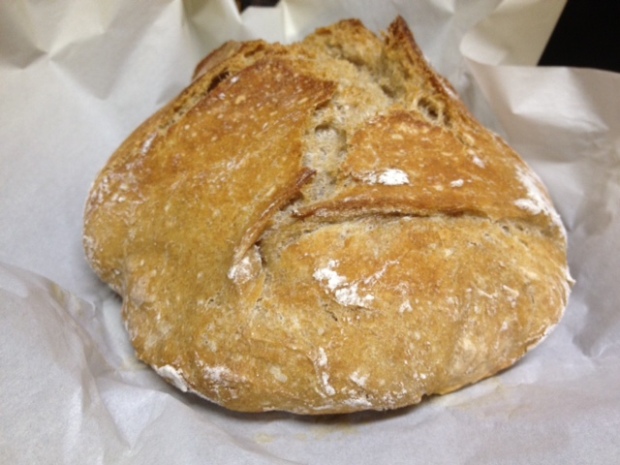 To add some extra fiber and whole grain goodness, I did substitute some whole wheat flour.  It definitely makes for a denser bread, but I always like the flavor of whole wheat. 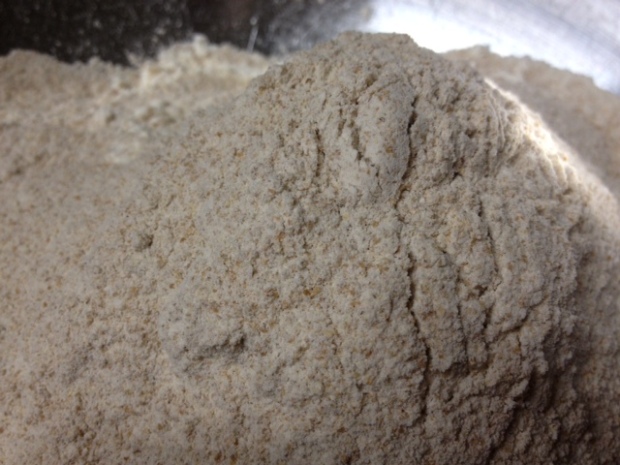 Start by putting 3 cups of flour in a very large bowl. I used half whole wheat, half regular flour. 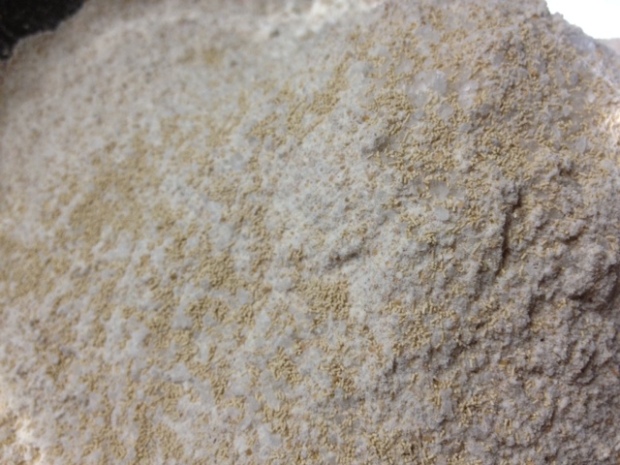 Add the yeast and salt. 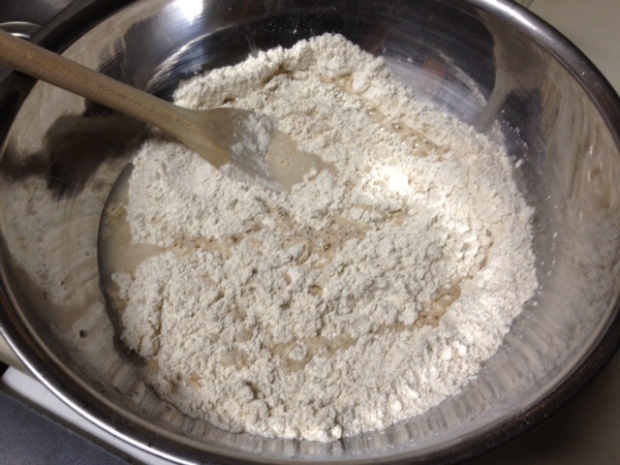 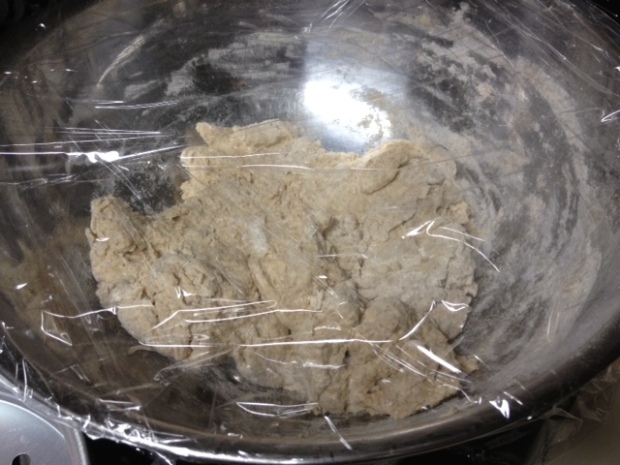 Stir everything together (just for a minute, until everything is combined). My dough was much drier and heavier than the picture in the original recipe, but it still turned out great. Cover with plastic wrap and let sit for 12-18 hours. 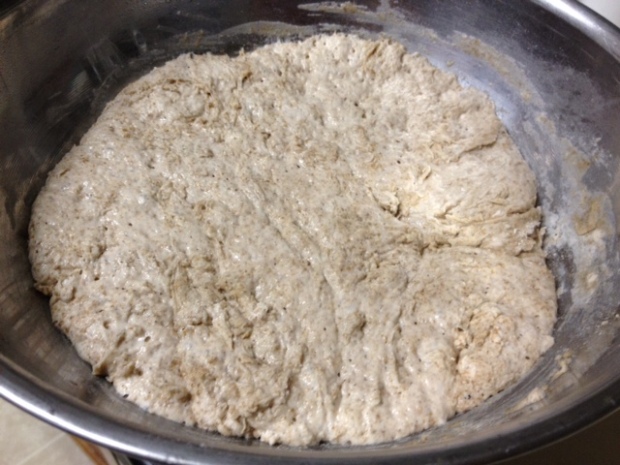 After that amount of time, it will look really wet and kind of weird. That’s normal. 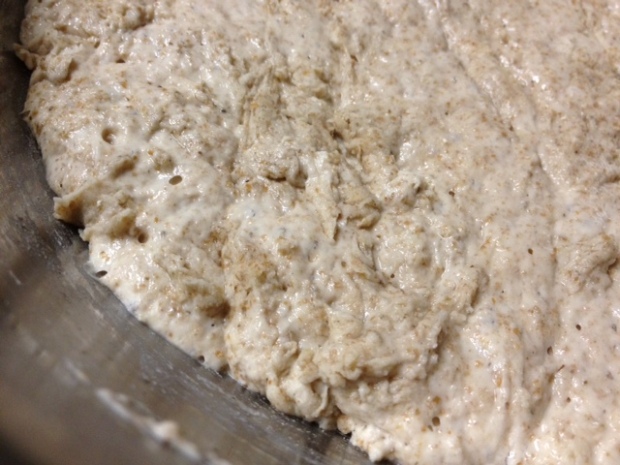 That looks pretty gross, but it will be delicious. 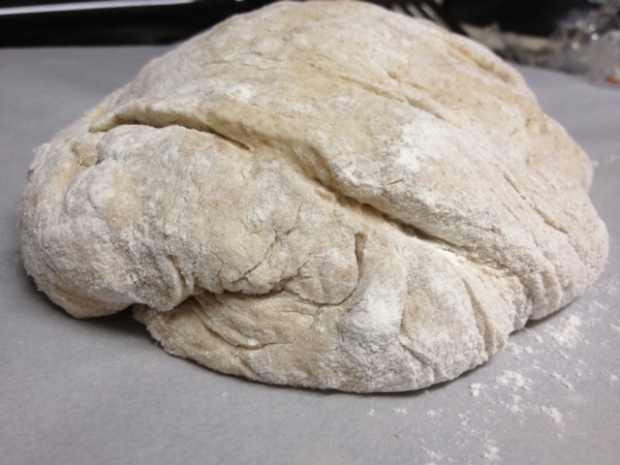 Preheat the oven to 450 F. Lay out on a heavily floured surface and work the flour into the dough some so it’s not all wet and squishy. Shape into a ball and cover with the plastic wrap again for the next half hour while the pot heats in the oven. On that note, put a large enameled cast iron pan and lid (or any pan that can withstand that kind of heat) in the oven for half an hour. 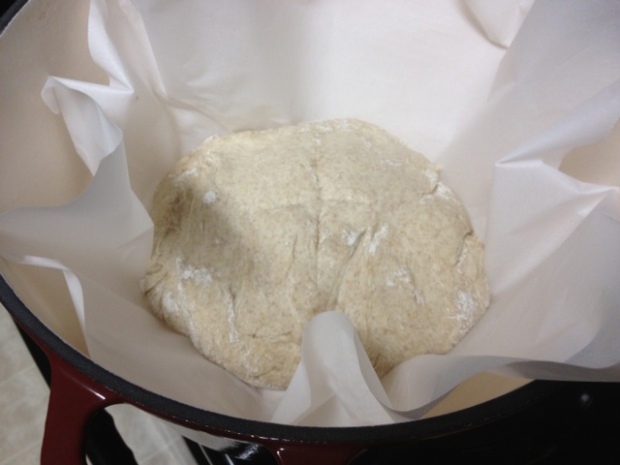 Slash an “X” in the top of the loaf and place the loaf in the (very hot!) pan. I lined it with parchment paper, but you don’t necessarily need to, it shouldn’t stick. 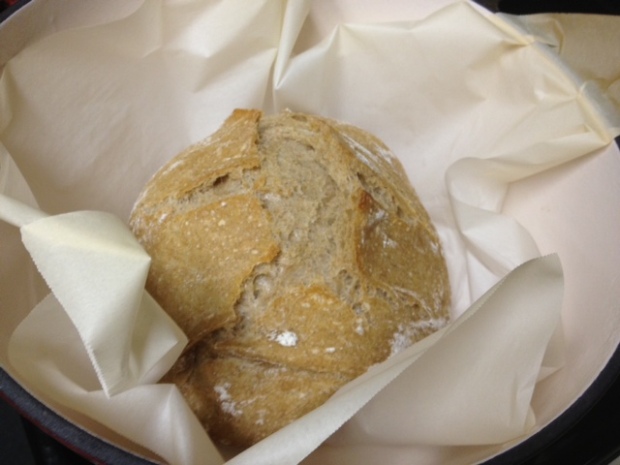 Cover with the lid and bake for 30 minutes. This is what it should look like at that point. 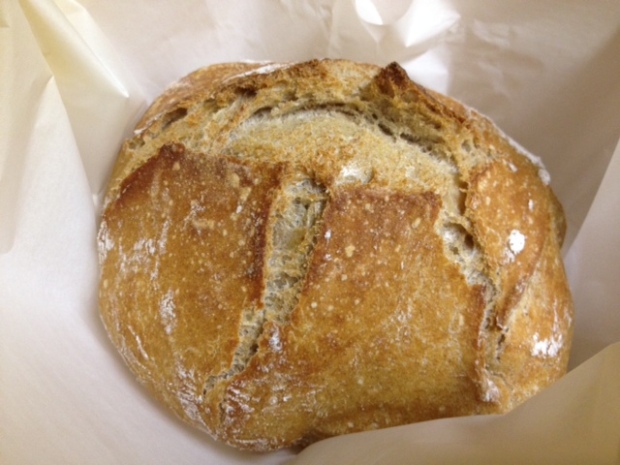 Remove the lid and cook for another 15 minutes until golden brown. Remove from the oven and set on a rack to cool. 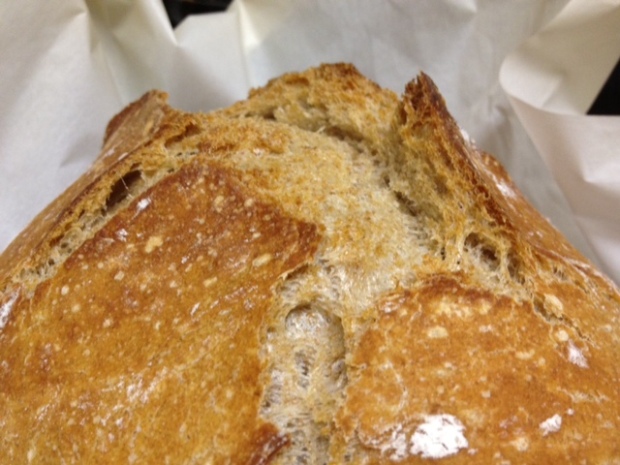 My co-workers devoured it the next morning, so I think we can qualify it as a success. For me, my “crusty artisan bread” wasn’t as “crust-y” as I’d like, but the difference in texture could have been due to the whole wheat flour. I guess that just means I have to test more recipes!

In a large mixing bowl, whisk together the flour, salt and yeast.  Add water and mix until a shaggy mixture forms (I found a wooden spoon worked best for this).  Cover the bowl with plastic wrap and set aside for 12 – 18 hours.  Overnight works great.

When you’re ready to bake, preheat oven to 450 degrees.  When the oven has heated up, place an enameled cast iron pot with a lid in the oven and heat the pot for 30 minutes (any pot that can withstand the heat will work).  Meanwhile, pour the (now very wet and sticky) dough onto a heavily floured surface and shape into a ball.  Cover with plastic wrap and let sit while the pot is heating.  Remove the hot pot from the oven and drop in the dough (I put parchment paper down first to make sure it didn’t stick).  Cover and return to oven for 30 minutes.

After 30 minutes, remove the lid and bake an additional 15 minutes.  Remove bread from oven and place on a cooling rack to cool.

A kneading and rolling kind of morning...Paul Holl

Happy Mother’s Day to my mama and frequent adven

#caturday cuddles with these two on a chilly sabba